The film is famously one of the classic "Movement" films made in the first year of the Third Reich, alongside Hitlerjunge Quex and Hans Westmar.  We own the two orginal SA Mann Brand posters, perhaps the only private collection which has both of them in the world.

In the midst of the busy bustle of the final preparations for the forthcoming premiere of SA MANN BRAND, we were successful in having Franz Seitz, Director of this Bavaria film, free for a short interview.

The film was screened at the Ministry of Propaganda in Berlin and was approved by the Censor without any cuts. And Franz Seitz from the start of our discussion showed a knowing, understandable satisfaction over this fact;  felt that this, in a way, was confirmation that his creation was on the right path.

The actual coronation of his work, up to now, he believes to be SA MANN BRAND – incidentally the 98th film in the long years of film work that he has shot.

“For a long time I took the liveliest part in Germany's contemplation of the Nation. And when the national movement finally struck out for decisive blows and achieved its glorious victory with youthful impetuosity, this immediately sparked the thought in me to now artificially design in a large film work what our brown soldiers had in the long years of tough fighting suffered and gone through. And it didn't leave me alone until I finally had the guarantee that I could put this idea into practice.”

“The later work then made ample compensation for the many difficulties that had to be overcome before it even happened. I will never be able to forget how miraculous it was when, in the huge night shots, the game became, so to speak, and an immediate reality took shape and life. I will never forget how the many hundreds of brown shirts that we had called to the film studio were involved, that they only existed on a film set, but did not actually have to carry out a nightly victory march through the former communist district."

"In fact, if the great experience of this work could only be felt to a small extent by the audience from the screen, then I can say that I would see it as the most beautiful success of my work...! “     -jth-

BELOW, a behind–the-scenes shot taken on 12 May 1933 at the Munich film studios of Emelka-Geiselgestieg, when the then Bavarian State Minister and German Reichstag member Hermann Esser visited the film set of SA Mann Brand to witness the historic filming of the first SA feature–length motion picture in Germany. This rare German press photograph is in our Collection, and was acquired in August 2019: A Nazi Scandal over this poster!

The Völkischer Beobachter reported on 13 June 1933 a scandal at the film's premiere, at the Gloria-Palast in Munich : "Friday evening on the occasion of the first screening of the film SA MANN BRAND an incident occurred. The SA-Gruppenführer Beckerle informed the public that a Polish artist had designed the advertising posters for the film. In view of the fact that the cinema owner refused to destroy the posters, he (Beckerle) demanded that the SA- and SS- members vacate the premises. Those present followed this request immediately. Then the event was canceled."

The cinema owner's promotion booklet ("Werberatschlag") sent by the film studio included this image of the prestigious "Uƒa Palast am Zoo" Berlin cinema façade (where the film's Berlin premiere took place) being decked out with huge film imagery ("Aussenfront") and exhorted cinema owners to do the same: A suggested newspaper dot matrix sketch from the Werberatschlag, showing a key scene from the film: 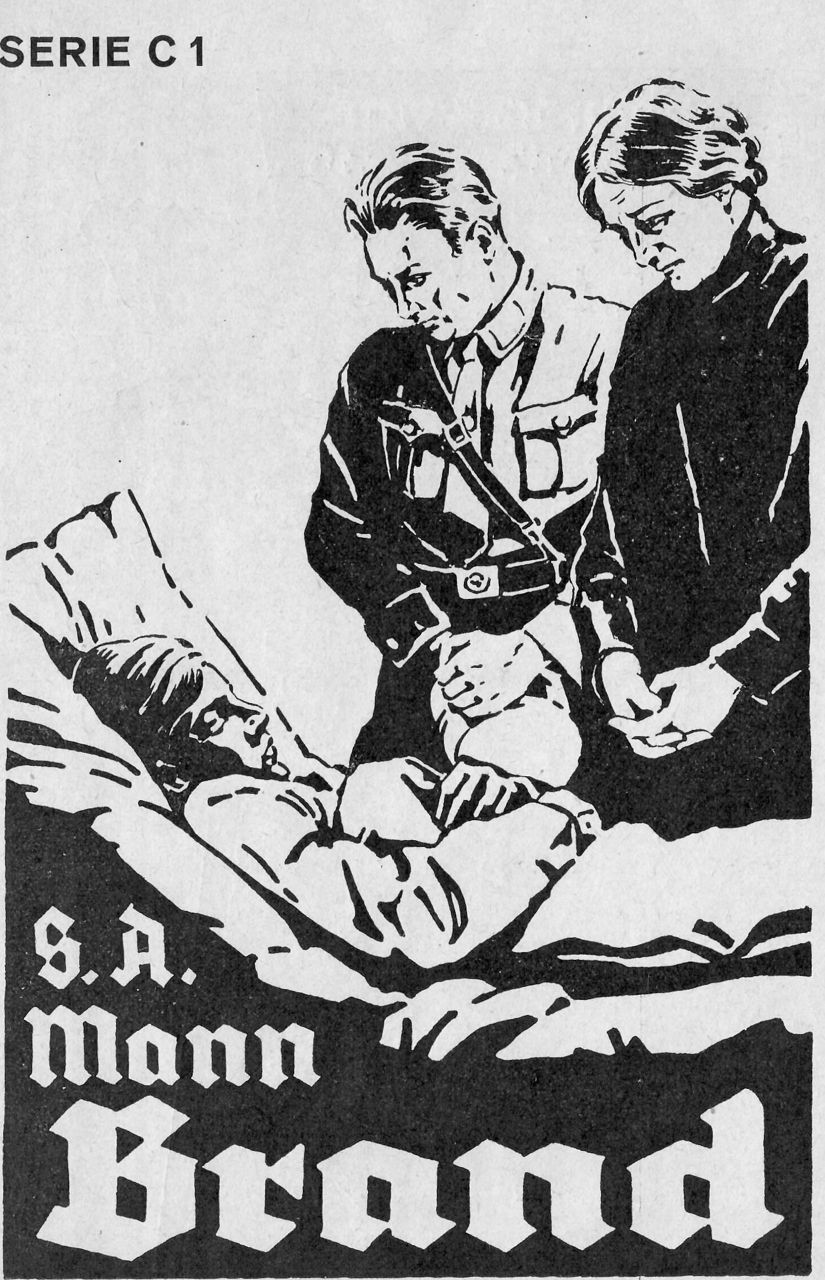 Below, the actual scene from the film which is depicted in the newspaper matrix sketch above in a rare film lobby card still in our Collection: 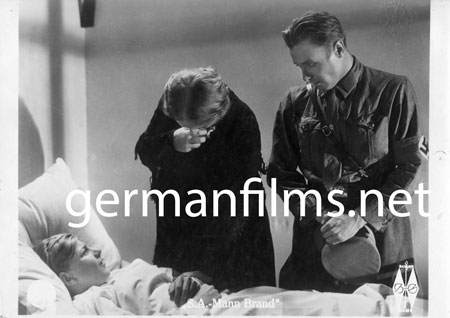 Below, a "Rosskarte" of the actor Heinz Klingenberg, who played the title role of Brand in the film. This one, from our Collection, autographed -- a very rare card!  Also, a cinema ticket for the film screening in the Yorkville Theatre in upper Manhattan, USA, in the 1934 American premiere season of the film. We have a second one of these super–rare  original cinema tickets for sale in our Poster Store.

Also shown:  We have subsequently acquired the German Film Censorship Office censorship card, issued in Munich, on 9 June 1933; along with the special "Prädikat" card, issued 3 days later; which awarded the film the distinction of being both "national building' and "artistically valuable." The film thus was allowed to be distributed at a tax–reduced fee to cinemas; which encouraged them to bring the film to their screen.

All items shown on this page from our Collection. 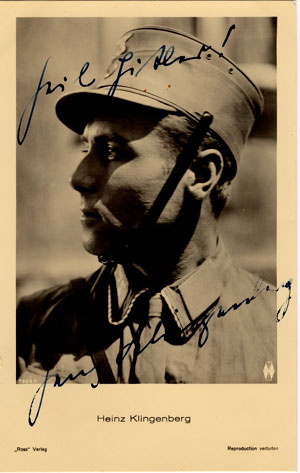 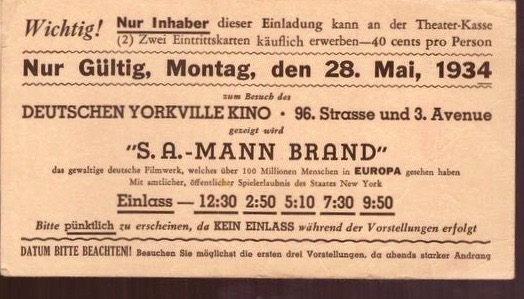 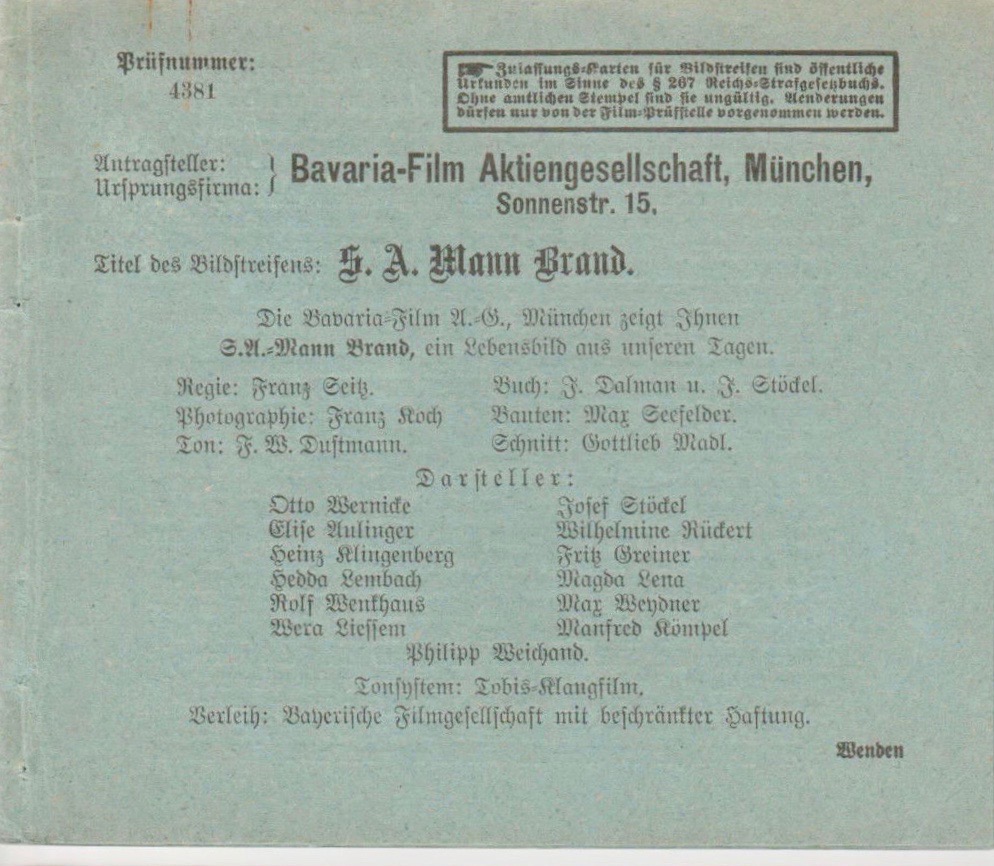 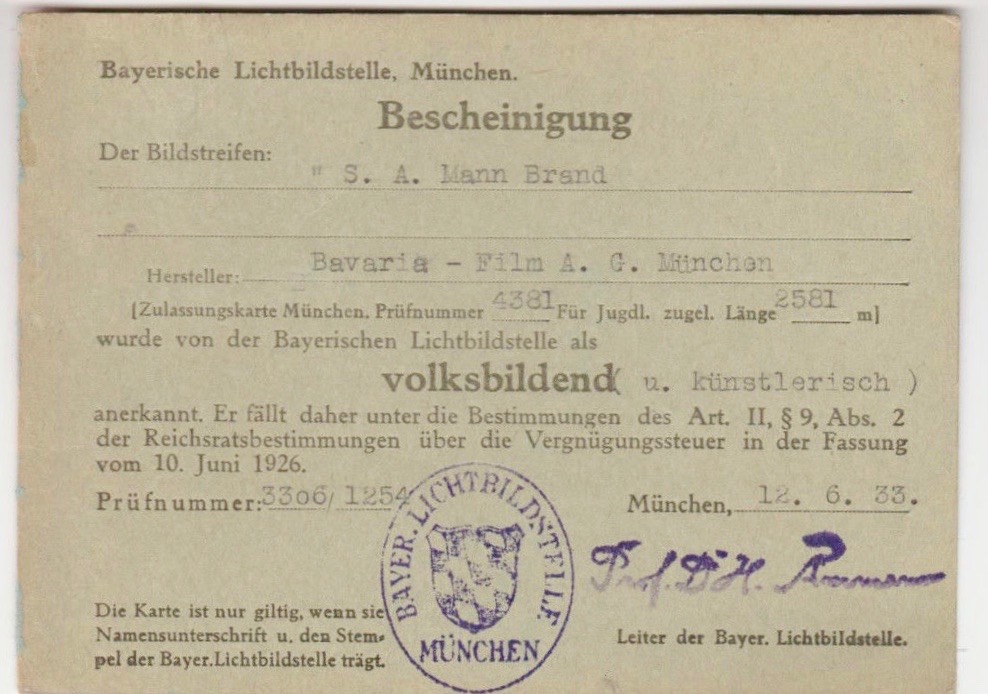 BELOW, from our newspaper archive, the advertisement announcing that the premiere of the film would take place that evening, 14 June 1933, at the Ufa Palast am Zoo cinema in Berlin. (Film-Kurier Tageszeitung). 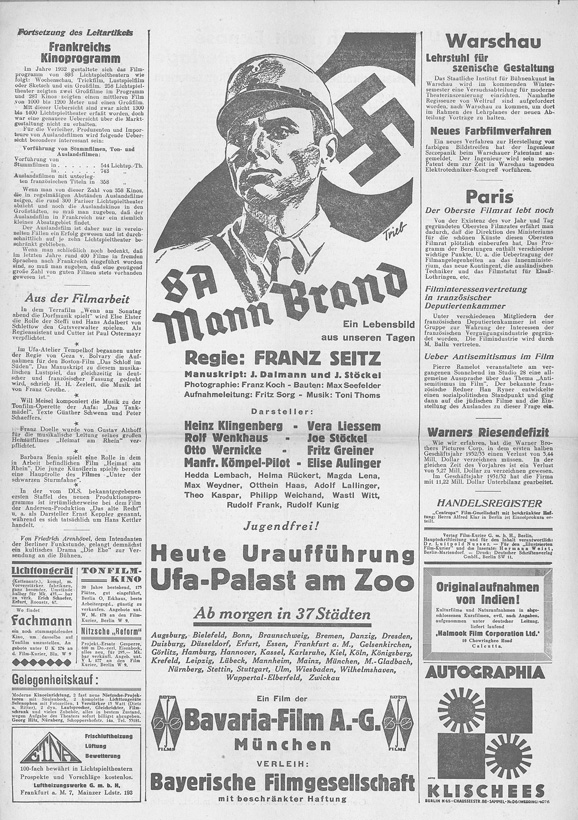 The review of the film in the Film-Kurier Tageszeitung, Berlin, on 15 June 1933, after the premiere at the Ufa-Palast-am-Zoo cinema, can be found here, translated into English.

SA MANN BRAND was also heavily promoted across the Reich through the Gaufilmstelle regional film distribution network.  Portable mobile cinema trucks -Tonfilmwagen - brought both feature films and short films to thousands of smaller towns and villages. Here is a photograph from a Gaufilmstelle magazine showing a typical village outdoor "cinema" set up by the Gaufilmstelle Tonfilmwagen driver who was also the projectionist : BELOW, the Gaufilmstelle Sachsen magazine FILM & FOTO article promoting the film in 1938, five years after the film's premiere.  It was still being shown through to at least 1943 for morale purposes, and to Hitler Youth audiences as well. The translation of the above article (including some sections on two following pages, and excluding the film's plot summary):

The film S A MANN BRAND was shown in the film theatres a relatively long time ago. But it is indisputable that at the time of its appearance (1933) it should have had less effect than it can have today. At that time, the unheard–of experience of the National Socialist upheaval was still underway, and people were not yet at a distance from things in order to fully understand their essence and their effect on the big picture.

Today, however, we are already in the middle of building up the new empire, and we are so far from the struggle for power that we can judge it from a different point of view than we did then. But therefore it seems more necessary than ever to bring back the victims of the SA men and the memory of their efforts. Already the realization: So far along is our current state of peaceful creation that for us the struggle time is past -– this knowledge is already worth pulling the film back from oblivion again. But what is even more important for us is to design around the film a National Socialist commemorative ceremony for the victims — for the unknown SA men. Like almost no other film, it has the necessity to do so, and everywhere today the SA is available to the local groups, which is called to do this service in its name. Where an SA man brings his own experience and can give the evening the sound of personal memories, then you should take this up. With this film, all film department managers are given the opportunity to put the SA spirit of then and now back into the foreground,  in cooperation with their SA. This cannot be compared to a normal film theatre and at the same time means the best National Socialist propaganda work. It must be pointed out, however, that it is fundamentally wrong to underline the political tendency in pre-propaganda, not just with this film but generally, since it is a well-known fact that the majority of the people who still need to be captured by National Socialist propaganda refuse to take part in such an event, even if they suspect such a tendency.

It is important that you first capture as many of your peers as possible and then impress them in a propagandistic way. As a rule, they had to find out afterwards that their distrust was absolutely unjustified and that it would have brought them a great experience.

Since the framework setting and the film itself must also grab hold the last of the other comrades, in this case it is unnecessary to introduce special introductory words to attune and align.

Prelude (through the SA and HJ)
Drums
SA songs (LP recordings) played lightly
Party official -core slogans, blended with music played lightly:
“The Führer to his People: We are not among those who simply rely on the hereafter. We want to work, we want to be active, we want to fight for our people, nothing is given to us.”

Speaker: (when possible from the SA or HJ):
“When we find ourselves in such an hour, speech must be clear and true!
There is no need to stir up what we have already forgotten. But we want to measure today by the past!”

Drums.
HJ-Speaker:
“As our songs sound throughout the land, when German Youth can laugh again!
When honor, loyalty, belief bind our hearts to this home, to this land!
Then we thank you who stood before us!
The fist tightly stretched around our flag!
Out of the darkness of those dark days we march for a free Fatherland!
Then we thank you, who suffered from hunger, misunderstood, mocked, ridiculed!

Then we thank you for those who died,
killed by cowardly bands of murderers,
You are the role model that guides us!

In our will we see the strength of
those with the purity of their faith
all of us have created a peaceful homeland !

So it was the SA yesterday and it is tomorrow,
that steadfastly carries the Leader's flag,
which after the time of struggle, death and need and misery
strikes German masts today. "

“We greet the Leader and vow:
His Will be our Want!
His Want be our Deed!

BELOW: In the issue of Film der Partei magazine from the Gaufilmstelle Deustche Ostmark, news that open air cinema screenings were held in Bayreuth, attended by 11,000 people. The propaganda film S A Mann Brand was watched by 5,000 audience members alone. It reports that this 'new form' of screenings in the summer months was enthusiastically supported.  All up, there were 400 film screenngs attended by 120,000 persons. In calenadr year 1937 the magazine reported some 96,000 citizens were shown films by 400 mobile cinema truck visits inside the borders of Gau Sachsn. Some 120,000 people saw films inside cinema theatres. Some 350,000 children and students attended film showings. Some 33,000 Hitler Youth members attended 66 screenings of "state-political films" such as Karl Ritter's Operation Michael and his Traitors. In total, just in one one Gau, no fewer than 967,400 persons attended films presented via the Gaufilmstelle Sachsen in 1937.

BELOW -- FURTHER regional touring of the film took place from July to September 1938 in the Saxony region  -- note SA MANN BRAND scheduled for Bautzen and greater Dresden. (from the Film & Foto magazine of Gaufilmstelle Sachsen.) Heinz Klingenberg, who portrayed the lead in SA Mann Brand, appeared in only a handful of Third Reich films before the war ended. Perhaps his most important role in subsequent films was to portray the oldest son in the Degenhardt family, whose father was played by the great Heinrich George, in 1944. Die Degenhardts was unique in showing the aftermath of actual Allied terror bombing destruction of a major city and its cultural and religious heritage. Shown here is Klingenberg as son Cornelius, 11 years after SA Mann Brand.